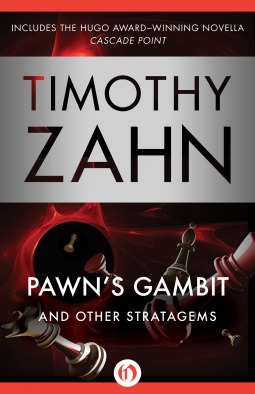 Pawn’s Gambit and Other Stratagems is a collection of kick-ass science fiction stories, including a novella, produced digitally for the first time. This is the cool thing about Open Road Integrated Media: the publishers find outstanding work from the pre-digital era and bring it to present-day readers anew so that it can be widely read and appreciated all over again. But though these stories were written earlier, many of them have never been published in book form before. I got to check out the collection free in exchange for an honest review, and I struck oil. I wondered why I hadn’t found this writer earlier, since I have been known to binge on sci fi now and then since the 1990’s. What Zahn is best known for is the Star Wars series, which I didn’t read. In passing it by, I nearly missed a fine writer, and I will watch for him in the future.

The settings, situations, and moods within this collection are artfully staggered, ranging from the ethical and philosophical dilemmas that the fertile imagination runs up against when what if scenarios are presented, to surprisingly funny situations. I love the characters Zahn creates, and the way they drive his stories forward. From that first “multi-tentacled grin” of the “Sk’cee” in The Price of Survival, I was hooked. The Giftie Gie Us had an infuriating ending that left me thinking of alternative possibilities. My own personal favorite, Cascade Point, was apparently the favorite of many others also, because it won the Hugo Award in 1984.

A couple of times I noted some gender stereotypes, but for work of its time period in a genre rife with this issue—which is probably why I need time out from my sci fi binges to read other things—it was surprisingly muted. Of 82 marks I made while I read it, only 2 related to gender stereotyping.

There are no weak links, nothing that seems like filler in between good stories; everything here is strong. At a couple of points I had to bite back the urge to laugh out loud while cruising through late at night while my spouse slumbered next to me. My second favorite story is the title novella, Pawn’s Gambit; I found it unexpectedly hilarious.

This brilliantly crafted collection goes on sale January 5, 2016. The only real question for the science fiction lover is how you are going to wait that long. Mark your calendar; you won’t want to miss out on this one.

3 thoughts on “Pawn’s Gambit and Other Stratagems, by Timothy Zahn*****”