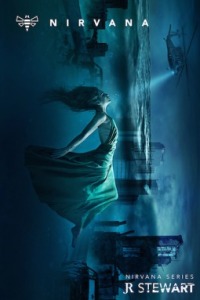 After a big-time rewrite and vast improvement, this hot new novel hits the shelves today. Below is an excerpt, courtesy of the publisher:

The shrill five a.m. siren jolts me awake to the usual calamity. The bunker’s stale air; the pelting of dust balls and stray debris. I groan and hear Andrew’s chuckle. When I open my eyes, he’s getting dressed.
“Are you leaving already?” I ask.
Andrew leans down for one long kiss. “It’s eight o’clock.”
I bolt up in bed. “The five a.m. just went off.”
“Nope. You slept through that one.”
I groan. “I’m late.”
He leans over me. “You always are, Kenders.”
I rub my eyes. “When will you be home?”
“Late. I’ve got a meeting with my boss.”
I let out a long yawn. “Cheating on me again?” I wink.
He laughs and pulls out my photo from his breast pocket. “I’ve got
this framed on my desk.”
“You should get a better picture.”
“The green dress matches your eyes.”
I turn up my nose. “My grad photo is outdated.”
“It says everything about you. No one dictates what Kenders does. You wouldn’t wear school colours like the rest of the class did. Your green dress stood out, just like you do.”
He’s right. Our punk band was protesting the loss of habitat for bees, and this wardrobe choice was one of many anti-establishment statements we made that year. Since 2080, when Hexagon became the university’s major sponsor, it had been a new tradition to wear school colours. We boycotted that convention, and even at graduation we were handing out flyers, standing up for what we believed in.
Andrew kisses me on the lips. “I’ll see you at lunch.” About an hour later, I wake up to a softer buzzing. This time, Andrew has set the alarm for me. He knows me well enough to be sure that I’ll drift back to sleep the moment he leaves. I jump out of bed to get ready. I run a comb through my tangled bangs, and pull up a mat of brown hair, covered in dust. That’s what happens when you hit the shower too late: no water in the reservoir, not even enough to brush my teeth. I rub at the dark splotches of dirt until my pale skin turns bright pink, and then give up on my hair and pull it into a ponytail while I step into my uniform. I stop for a moment before heading out the door, and pull Andrew’s sweatshirt over my head. It drapes in a large fold over my narrow shoulders. I rush to jump onto the bus rumbling down the road, but it’s already passed by my compound.