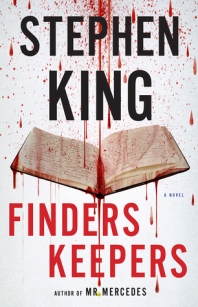 “For your family, you do all that you can.”

When I read that one, simple sentence, it occurred to me that this common thread runs through a lot of Stephen King’s work, and it’s one reason he has developed such an easy simpatico with much of his readership, despite the murky waters his books bob into. It’s about our family, and about our common humanity, and the bad guys are the ones that can’t be tapped into, that violate that sacred reality.

As the book opens, we have our killer—or one of them—from Mr. Mercedes. And at this point, I have to tell you that if you haven’t read Mr. Mercedes yet, do that before you do this. (Mr. Mercedes is reviewed by me here: https://seattlebookmamablog.org/2015/04/24/mr-mercedes-by-stephen-king/.) Seriously. I’ve seen clueless-seeming individuals out there on social media wondering if it makes a difference, and oh my stars. Why, why, why.

I suppose if you are just stone flat broke and have no access to a public library, and by some stroke of luck you have a free copy of this book but cannot get the first in the series, then yes, King gives you just enough of the back story here to enable you to start midstream. But if at all possible, you really ought to read the first book first. There were so many little poignant moments—for example when Hodges thinks about Janey—that just made my insides do a back flip, and if you plunge into this story first, you’re going to miss so much of that. And in the end, you’re going to want to hunt down Mr. Mercedes and read it anyway, so why not try to do it in order?

All righty. So as our story opens, Morris, one of the murdering thieves from Mr. Mercedes, is an old man now, and he’s just getting out of prison. He’s been waiting a long, long time for this, because he has buried a whole lot of money as well as the last, hand-scribed novels of John Rothstein, a now-dead author whose work he has loved his whole life. He isn’t sure what he wants more, the money—well yeah—or oh my god, those notebooks! To read them! He knows the sensible thing to do is try to sell them, because they’re doubtless worth a small fortune, but first, just to read them. And now he’s out.

What he doesn’t know is that all those buried goodies have been found by a kid who happens to live and play in the area where Morris buried all of that. Nature has changed the contours of the woods where the trunk was interred, and a corner was revealed, just enough to make a naturally bright, curious kid want to know what it was. So that money is gone. It’s gone. In fact, it’s all gone.

The tension in this story builds a lot more slowly than most of King’s work, and at first I thought it was a sign that our author was slowing down. Au contraire, Pierre. Because really, it’s more about the pacing of the genre. When King writes his supernatural baskets o’spiders, he puts that pedal down on the floor, sometimes on the very first page, and it’s like the world’s most terrifying roller coaster until after the climax. The reader’s heart won’t stop slamming till the problem is essentially solved, at least for the moment—I’m talking about his horror novels here, not his mysteries, including this one—until that brief period at the end in which the loose ends are tied up, and the protagonists can laugh about the whole thing over coffee, or whatever.

The tension in a mystery like this one, on the other hand, is a much more gradual climb. It’s supposed to be that way. We get the tingle of dread, the near-misses, but instead of going from zero to eighty in chapter one, it’s more of a traditional hill, building, building, building. It never gets dull, but the reader will actually be able to put the book down to go make dinner, to do homework, to answer the phone. And that doesn’t make it weaker writing; it’s just a different type of story.

Once King gets to the top of that hill somewhere close to the 80% mark, we really have to stay with the book and finish it. Just finish it.

I did not read this as a galley; it was a Mother’s Day gift from one of my sons. They never miss a year, my boys, and they almost always get me one of my most coveted titles. I don’t put a lot of books on my wish list these days because I can get so many outstanding books free, but I had to have this one, and am glad my eagle-eyed son ferreted it out of my list and ordered it for me. Thanks, Benj.

Is it worth your hard-earned dollars? If you like really good mysteries and thrillers, absolutely, positively yes. BUT. You have to read Mr. Mercedes first!