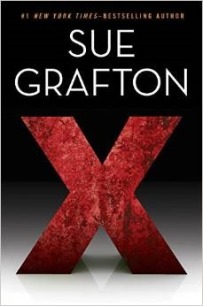 Before I review this title, I have a plea: can we just make the alphabet a teensy bit longer? Because I don’t think I am ready for this series to end, and it’s getting perilously close. But meanwhile, thank you to Net Galley and Putnam-Penguin Publishers for the free DRC, an unexpected treat, especially since it was such a clean galley. The title goes up for sale August 25, but you can order it in advance, too.

As often happens, our story isn’t just about one mystery. There’s an official investigation that goes bad; an unofficial investigation that goes worse; and then there’s a big pile of trouble that drops itself into the neighborhood where Kinsey and Henry (who is ten percent Kinsey’s landlord and ninety percent her surrogate father) live. As always, taut suspense is intermingled brilliantly with silly, naughty, impulsive things that Kinsey Millhone, our intrepid but mischievous detective, dreams up.

This past year saw Grafton inducted as a Grand Master by her fellow mystery writers, and it really should have happened sooner. The level of writing she practices spills over the standard detective story genre and at times approaches literary fiction.

In this story, Kinsey is concerned about the drought in California, and the issue is deftly interwoven into the plot without ever becoming preachy or slowing the pace. Like everything else Grafton writes, it’s well executed.

And here’s my own confession: I love this book so hard that I deliberately slowed down how much of it I read each day. I could have had this review to you last week, but every time I noted that I’d gone 10 or 15 percent further in, I took it away from myself and forced myself to go read a different galley for awhile, sort of like Mary Ingalls making her Christmas candy last as long as possible. But now it’s finished, and the only thing left to do is tell you that it’s every bit as good as what you have come to expect. And if you are new to the series…well okay, I guess if you are new to the series, you are either really young, or you’ve been in a coma for the last twenty years. Welcome to the world of the living; here is your book. And although it can stand on its own just fine if you read it without reading the A-W mysteries, it’s even better if you read them in order.

I can remember my first Kinsey Millhone story. I found C is for Corpse in a train station shop, and soon afterward found myself in bed, recovering from whiplash. (People really do get whiplash; mine was from a car wreck, not a train wreck.) I was mostly okay as long as I kept my head on the pillow and did not try to move my neck—so ideal for reading a paperback. Once I was up and at ‘em, I hunted down the A and B titles, and from then forward, I read the series in order. And over the years and many installments, Kinsey has evolved from the super-hardboiled detective she was in the first book (which was already really strong) to a more developed character. Because when you have a longstanding series, you really can’t have one episode after another in which your protagonist gets whacked over the head or grabbed from behind, hogtied and tossed into the trunk of a car. People start to roll their eyes if you do too much of that shit, but then you have to find another way to maintain their interest level. Grafton does this by combining some really tricky, interesting problems (and yes, some danger) with a lot of character development.

I don’t know about you, but I tend to assign faces of people I know or have seen to characters in books. It helps me run the book as a mental movie if they have a face and a voice. Since Grafton has said in interviews that she sees Kinsey as a sort of younger, skinnier alter ego, I have created an imaginary Kinsey who looks like a cross between younger-Grafton and Stephanie Zimbalist (actor who played a TV detective many years ago). But when she opens her mouth to crack wise, I hear the voice of Roseanne Barr. So go figure!

So here we are. I am more than twenty years older than when I first met Kinsey; since then, I’ve gone back to school, had a career, had another child and raised her, adopted another child and raised him, and retired from teaching. Through it all, Kinsey has remained a wonderful constant, perhaps the adult version of having Grandma come to visit. Oh boy, she’s here! Or, oh boy, she’s coming back! And frankly, I am just not ready to let go. If you’ve been following the series for a long time too, you may feel the same.

The good news is the present. Right now, there’s this wonderful detective novel that you can order up, and you can float away to Santa Teresa. What an awesome vacation read. Even if it rains wherever you are going, you could have a terrific time curled up on a bed just reading this. In fact, you don’t really even have to go anywhere. Turn your phone off; get your favorite beverage and maybe some munchies; and reserve a time to just wallow and enjoy. Because when it comes to a riveting novel that is also, at times, laugh-out-loud funny, I just don’t see where you will find anything better.