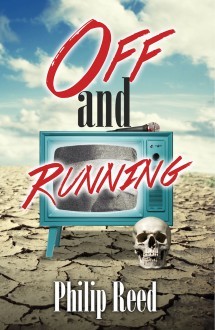 Off and Running is a comic caper set around Y2K. Jack is a writer looking for his lucky break; Walt is an old man, a beloved American icon who hasn’t published a memoir yet. Garrett is Walt’s ill-begotten, bad-tempered adult son, the worst celebrity brat imaginable. Reed tosses them all into his literary blender and what comes out is both hilarious and at times, genuinely suspenseful as well. Thank you once more to Brash Books and Net Galley for permitting me a sneak peek; this amusing tale will be for sale in August.

Jack has had one project after another not work out. His wife, Sarah, has had it with him, and wants him to go out and get a real job. Every day she schleps out to her full time job, coming home tired and ill tempered, and she doesn’t want to hear anymore about how Jack’s latest book proposal will make money for sure. She has a change of heart when Jack’s agent sends him out to see the venerated, universally loved comedian, Walt Stuckey. Walt is choosey about who he sees and what he talks about, but over time, Jack builds a genuine rapport with him. They become friends, and Jack is accepted as Walt’s biographer. Just as Walt invites Jack and Sarah to come stay the weekend with him and his girlfriend, Mary, the unthinkable happens: Walt has a stroke. The son-from-hell Walt loves but has been unable to develop a positive relationship with takes charge. Walt is held virtually a prisoner, and it soon becomes clear that Garrett does not really want Walt to recover. He wants Walt’s financial empire, and he will be the executor of Walt’s estate when he goes.

So the first thing Garrett does is to isolate Walt. Since his own memoir is the one thing Walt is truly excited about and could give him reason to live, Garrett uses his power-of-attorney privilege to fire Jack and cancel the memoir. Mary isn’t having any of it, and once he thinks about it, neither is Jack. Jack is determined to finish this book. It’s what Walt wants, too. And most of all, Jack wants to know why the reference to Bebe Rebozo in Walt’s comedy routine caused his over the top hit comedy show, which was “funnier ‘n hell”, to be cancelled without a moment’s warning. He’ll find out, or die trying.

So Jack and Mary launch a rescue mission to free Walt from his rotten son-turned-captor, and the result is alternately suspenseful and hilarious.

There are several events in the book that strain credulity, but it’s okay, because this is not literary fiction; this is a caper. I couldn’t wait to see how it ended, and I was sorry when it did. A considerable portion of the story is set in Death Valley, and the heat, the inescapable sun, the gritty sand were all so palpable that I nearly resolved never to leave my cool damp domicile again.

We all need something ridiculous in our lives now and then. Humor relaxes us and puts our own worries into perspective. Do yourself a favor and order this book when it comes out digitally August 4. Then, you’ll be off and running!