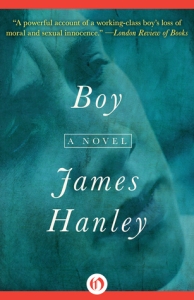 3.49 stars, and my thanks go to Net Galley and Open Road Integrated Media for the DRC. The digital version of this story became available yesterday, and you can get a copy of your own if you’d like.

Boy, a tragic story that reads like a hybrid between Dickens and Melville, was originally published in 1930, and ran into all sorts of censorship. There are passages that contain sex that would not even be considered erotica now, since they avoid much specificity, but for the bourgeoisie of that time period, it was way too much. The censorship fight was where my interest came from, because I don’t generally seek out tragedy. I wanted to see what all the fuss was about. Any time anyone tries to keep the printed word from being accessible, my curiosity is piqued.

Arthur Fearon is an academically talented student whose parents make him leave school at thirteen even though at the time, the legal drop-out age in Britain is fourteen. His father has been on strike and had no income for awhile, and is bad at bringing his paycheck home when he has one. An only child, his parents both look to Arthur to become the family bread winner. His father finds him a position on the docks, and Arthur hates it so much that he stows away on board a ship, with the notion that he will emigrate away from England, maybe land in the United States and get a fresh start. Young as he is,it never occurs to him to learn which ship is going where. The ship he hides on isn’t even headed that way.

Issues of child abuse and in particular the way this youngster is turned away by every adult from whom he seeks help are hard on the eyes and hard on the heart.

The writing style is one that may not work for a lot of people in 2015. This was written in more or less the same era as Upton Sinclair’s The Jungle, and it has a lot of stylistic similarities. Inner narratives run on for much longer than one might expect, because the reader of 80 years ago had a much greater attention span. There is a fair amount of repetition that was considered acceptable then but might not be appreciated by today’s readers.

One thing I can tell you for sure: if you are feeling sorry for yourself, this book will make all your own problems look like nothing at all. Just right for the reader that wants a good three-hanky novel.