“Everybody in the country got color on the brain…white folks trying to brown themselves up and looking down on everything that ain’t white at the same time; black folks puttin’ each other down for being too black; brown folks trying to make sure nobody mistakes them for black; yellow folks trying to convince themselves they’re white.”

Timely? Why yes! So isn’t it interesting that this book was initially published in 1994?

My many thanks go to Net Galley and Brash Books for a fascinating DRC. 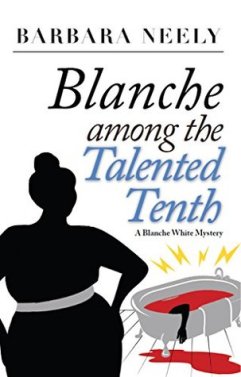 The Blanche White series is a mystery series, but Neely uses this approachable medium as a forum to discuss race, primarily the unspoken caste system that has developed about and among people of color in the United States.

In our story, Blanche is invited to visit a black resort on the coast of Maine. Her sister is dead, and Blanche is now a parent to her two children. This book is the second in the series, and we are told that during the first, Blanche had come away from a bad situation with a bundle of money that she dedicated to the excellent education of her two elementary-aged children. Now Taifa, her daughter, is anxious that she use a hair “relaxer” to straighten her ‘fro. It’s bad enough that Mama Blanche is eggplant-dark. Bad enough that she is not part of the black petit bourgeoisie, but a working class woman…a maid, no less! And so Taifa’s loyalty is divided; she wants to fit in with these pale, wealthy folk, but she also loves her Mama Blanche. Blanche in turn is torn. She doesn’t fry her hair, but she does have a conversation about it with the children.

Meanwhile we learn that a woman named Faith is dead, and it may not have been accidental. Like Agatha Christie’s Murder On the Orient Express, it seems just about everyone here has a reason to want Faith dead. That isn’t Blanche’s business, of course…until it is.

I do love a good mystery, and will cheerfully sit down to a tower of Blanche books if I can find them.
The cover is what drew me initially; I looked at the wide hips and thought this was surely my kind of woman.

But race is more than academically interesting for me; my own family is blended and my Caucasian children grown and gone, which has left me the only white person in the house. Most days I don’t think about it, but for years, planning the family vacation was both eye-opening and interesting. One child at home is Caucasian and Japanese; the other (was) African-American. We enjoyed Yellowstone, but heartily regret having been forced to stop for gas in the Idaho panhandle, an experience we will avoid in the future. Now my African-American son is grown and out of the house, but I will never look at the world the same way. It’s been a real education.

Surely anyone who looks at this book’s title understands that s/he is in for more than just a mystery story. The depth of analysis kept me flagging pages and rereading passages. I love the feminist spirit our hero embodies.

I did find it interesting that although skin, hair, and attitude were discussed freely, African immigrants never even made it into the discussion, let alone into the exclusive resort.

The social message somewhat dominates the plot, but the mystery is also a fun read. Highly recommended for those willing to confront today’s issues.

As for me, I loved the blend of story and message. Because really, until the United States deals with the escalating issue of racial inequality, particularly regarding African-Americans… I can’t breathe.