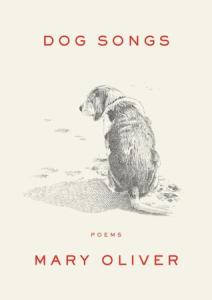 What, me reading poetry? Not for a long time, actually, apart from this. Not since the 1990s. But this was a gift, and it was given to me by a family member who knows how much I love my own pooch, who has been through unimaginable drama. The pork chop theft and subsequent surgery; the car that hit him; the allergies; the arthritis.

And reader, don’t take my review too seriously, because when it comes to poets that write about nature and animals, I don’t have much discernment. I am an urban type, and my eyes glaze over when I read about the dew on the weeds, and yada yada. But the author blurb says Oliver won the Pulitzer for her poetry back in 1984. Go figure.

Had I known we would be describing dog “excrement” and comparing it to black pearls, I would not have read it with breakfast.

One poem really did speak to me though. I don’t know whether that makes it a good poem; after all, if you check to see what gets attention on YouTube, it’s all cats and dogs. The public is easily led in that direction, and I am one of them. But the poem that got to me was when Oliver described the way her little dog (and on the cover we just happen to have a beagle that looks a lot like mine, the subject of some of her writing) responded when she began planning a trip. She became so overwhelmingly convinced that the little fellow would be “sad, sad, sad” that she canceled the trip. And whereas I have never done that, I have come close any number of times. So for me, the poem was lovely because it reached a common point that I had previously thought must qualify me as ready for the rubber room. Who lets her dog dictate her travel plans?

I haven’t given you much to go on. In this particular case, the gift was spot on, but in ways that were more personal, perhaps, than had to do with the writing. The family member who gifted it to me had also been enormously helpful during our most recent dog-crisis, so it represented something that she and I had shared.

Unless you are very fond of poetry and pets, you may not want to spring full cover price for this one, but if the circumstances warrant, it’s a very nice thing to give someone who is much attached to their dog, or who is (dreadful thought, but it happens) grieving one.

I hope not to be among them for years to come!