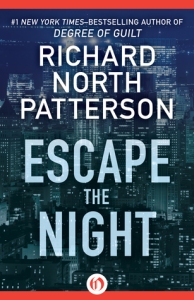 The setting at the outset is New York City during the McCarthy era. Black Jack Carey owns a publishing house that carries work by a left-leaning writer that is being watched by the CIA. Pressure from HUAC comes to scrap the writer’s work. Son Charles, eldest and best-loved son of Black Jack, refuses to yield to the pressure. Resentful younger son Philip, weaker in character and more easily swayed, takes the side of the government. He hopes his sensible nature will cause his father to will Van Dreelen and Carey to him rather than Charles.

At multiple places within this white-knuckle thriller, I had to put the book away because even with the assistance of sleeping pills, I knew I could not fall asleep if this story was in my hands. Were it not for that, I surely would have finished it sooner. This title along with a nonfiction galley have occupied my interest and attention far more than any of the other four books I’ve been reading.

“Englehardt had learned that men who spied on other men, out of the loneliness of such a job, came to like or dislike their chosen quarry. But in his soul, he knew that the secret passion for the Careys grew from something stronger.

“The brothers’ rivalry was also his.”

Eventually Englehardt is officially ordered to abandon the Careys, but his psychosis is too thoroughly developed to let go. He turns to the CIA and is able to extend his surveillance. Phillip Carey’s cause has become his own. He despises Charles and is determined to do whatever dark thing is necessary for Phillip to inherit everything.

Generally speaking, I don’t read books about wealthy folk, and this is for a variety of reasons I won’t go into here. But the characters of John, Phillip, Englehardt, and later, Peter Carey, are so intimately sculpted that I had to buy the author’s premise. Once I did so, the pace picked up and the story was unstoppable.

The ending came with hairpin turns and swift kicks to the reader’s solar plexus, but everything that occurred seemed eminently believable, because the main characters and setting were so palpable.

My one small quibble with the writer–and it’s a common problem in literature not specifically geared toward women, but someone has to talk about it–is that the people who were well developed and occupied center stage were all men. Women existed here only as a foil for what was going to happen to someone else. For the novel to go beyond “really good” to “outstanding”, a novelist needs to be able to develop characters of both genders.

That shouldn’t keep you from buying this title, though. It’s one helluva ride. But don’t think you’re going to read it in small easy pieces. Once you pass a certain point, you have to keep going, and you may see the new day dawning and wonder where the night went.