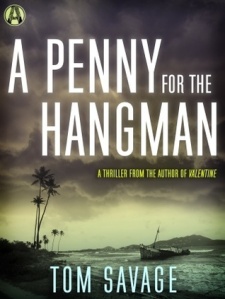 Tom Savage is not new to the scary-book biz, but he was new to me. Maybe that is why I fell for the formulaic-looking beginning to this book. Ho hum. Been there, read that. Since it was obviously a fast read, I figured I would get it over with, write my review, poor fellow, and move on.

That was my mistake.

Here’s the premise: Karen Tyler is a journalist just looking for the meaty, headline-grabbing story that will launch her career. Her editor isn’t giving her much to work with. Then comes the phantom phone call. It relates to an infamous historical murder, and it is too tempting for a journalist with any kind of moxie to walk away from.

See, many years ago, a pair of juvenile delinquents had murdered their entire household. It was an unthinkable killing spree. One of the youngsters was found at the scene of the crime; the other had painted himself in the blood of his family (and that of an innocent servant who was in the way) and made a break for it. The coast guard picked him up. Both boys went away to serve long sentences; when they were released, neither was young anymore.

Tyler, our journalist, gets a phone call from one of the two killers, and he offers her an exclusive interview, swears there is more to the story than anyone knew. He will even pay her plane fare to St. Thomas, adding a free tropical vacation to his offer.

To reinforce our fears, the narrative is punctuated with journal entries by various characters in the story. And oh my my my, it sure doesn’t look good for our gutsy but perhaps imprudent reporter.

But nothing, no nothing, is the way it seems. I caught onto one plot trick, but then by the time I caught on, Savage had pretty much given me all the puzzle pieces, and it wasn’t a major plot point that I sleuthed out, it was fairly incidental. Savage is a magician with story, and he has more hidden up his sleeve than any reader can possibly guess!

So for Halloween this year, give yourself a gift that will keep those shadows jumping on the wall as you read in your favorite book by the fire…or the space heater…or…well, you get the idea. This story, which will be released October 7, has more twists, turns, uphill battles and plunges than Space Mountain, and more bodies than a slasher flick (but without the excessive gore, at least on my own personal ick-meter).

Thank you and thank you again to Net Galley and Random House for treating me to Savage’s work. His most successful book before this one, they say, is Valentine, and it goes onto my to-read shelf.

Why do we read these terrifying tales with blood on the stones and body parts in places they don’t belong? I think it is because they make us feel so much safer and more secure in our own little nooks and crannies. When there’s a killer thundering around every corner, it makes our own problems seem so small.

If you are in need of that sort of pick-me-up, or if you just adore a book in which things and people unknown lurk in the shadows—or not—well maybe so, actually—then you just have to get Savage’s book. If you aren’t up for reading it all by yourself, then you can read it with your friend or partner, and it will be twice the thrill.