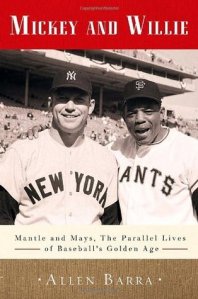 Three stars for general interest; four stars for a niche audience. If you enjoy baseball and also like biographies, this may be a winner for you. Thank you to Crown Publishing and edelweiss for the advance reader’s copy.

As for me, I found myself wishing I had read separate biographies of each of these players before tackling one that compares the two. The first third of the book was very slow going for me, because the narrative flips from one to the other frequently, and during their growing up years I found myself becoming confused…now wait a second, which one has the horse? There was so much minutiae and I had a hard time keeping track.

That said, the story has a certain elegance. I like the fact that it breaks apart stereotypes: Willie Mays grew up in the Jim Crow south, but his family was part of the Black middle class, urban folks with a degree of sophistication. Pictures of him as a youngster show a well developed, well nourished child wearing a nice suit. Mantle, on the other hand, grew up in a very poor mining community in Oklahoma. Had baseball not permitted him to escape Commerce, Oklahoma, he would likely have had to go into the mines as well.

Mantle was diagnosed early in life with osteomyelitis, and nearly had to have his leg amputated. Though he was able to save the leg and go on to run like lightning on the field, he was booed by New York fans who were convinced he had dodged the draft. His agent and manager both spread the word that he had been declared unfit to serve because of his condition, but the fans saw the man run and, in the parlance of the time, believed his sick-leg story to be a lot of hooey.

Mays tried to avoid the draft by pointing out correctly that he had eleven dependents, but they made him serve anyway. However, he was never placed in harm’s way, and spent his tenure in the armed forces playing ball for a military team. When he returned to the professional field, he was already in shape, just as if he’d been off playing winter ball for a year or so.
This middle portion of the book is very interesting and has a photograph section that can actually be seen on an e-reader, a definite bonus. I enjoyed reading about their professional lives, and since they start far away from one another and grow gradually closer until they are together, the transitions are buttery smooth.

The end portion of the book is a let-down, although since it discusses their careers and bodies in decline, it is probably inevitable; I felt it could have done with some pruning, but those who hang onto every individual statistic will enjoy the charts and comparisons.

To me, however, trying to decide which athlete is “better” is specious. Who cares? They are both legends. They both deserve to be remembered well. There is no contest, as far as I am concerned.

Seeing how they struggled financially once they could no longer play was really a sad thing, and a good reminder of why star athletes earn every penny they make. By their late 30’s they will be deemed old men, and most of their lives will still be in front of them. Not everyone can become a coach, a manager, or an announcer. There aren’t enough of those positions, and many athletes aren’t gifted as writers, speakers, or teachers. They know what to do, but it’s muscle memory, and when it’s gone, it’s gone.

Barra’s research is mostly comprised of secondary sources; he has a few brief interviews, but his perpetual insistence on badgering Mays over his abstinence from the Civil Rights struggle got him cut off time after time. Mays was a reticent person, and it struck me once again that Black athletes have put up with such double standards; nobody climbs all over a Caucasian player who simply isn’t political and prefers to keep his thoughts to himself. Yet Mays hears about it all the time, and his biographer here is as bad as any of them.

I appreciated his references to what he says are the best biographies of each man individually; those are now on my to-read list. Meanwhile, I recommend this book to die-hard baseball enthusiasts who already know a little something about Mays and Mantle individually.