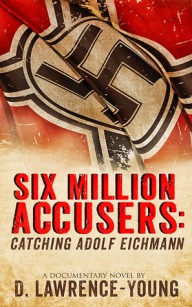 Please lower the safety bar in front of you, and make certain your belt is securely fastened. We will be traveling at an astonishing rate of speed; keep your hands firmly on your book or digital reader. As you finish Six Million Accusers: Catching Adolph Eichmann, you may be disoriented and need to remind yourself where you are and what day it is. It’s that gripping.

My deep gratitude goes to Mr. Lawrence-Young, his publishers, and NetGalley for letting me read and review this amazing novel.

David Lawrence-Young packs a powerful story into a well plotted, brilliantly paced narrative in order to tell the story of the capture of Adolph Eichmann, one of the nastiest and most powerful Nazis responsible for the deaths of six million Jews in eight nations, not to mention millions more who were Gypsies, political opponents, disabled, gay, or who were mistaken for somebody else. And of course, these numbers don’t include those who died in the battlefields, seas and skies of the European theater of World War II. Only Hitler and Himmler were above Eichmann in the fascist pecking order.

Because story is such a potent vehicle for the truth, the author has chosen historical fiction over a more expository nonfiction format. I think he chose well. He has a long list of previously published books that precede this one, from Shakespeare to an English textbook to other works of historical fiction, but he says this one was the most difficult, and I believe it. As is true of the finest writers of this genre, he has a bibliography at tne end of his work to let us know that the story is absolutely true; he has filled in the cracks by inventing the dialogue instead of paraphrasing as he would have to do with a work of nonfiction, but this is the real deal nevertheless. This is what happened.

Once this was made plain (I always read the introduction, and I also read the author page before I begin), I dug myself into my favorite reading corner and prepared to concentrate, convinced that while compelling, the historical journey would require full focus and strong literacy skills. I was surprised to find that he wrote in a manner that will be accessible to just about anyone who wants to read it, and the need to focus is moot, because from the get-go, he has our eyes and full attention automatically. The pace builds in a glorious arc, reaching breakneck speed as we close in on Eichmann along with the team of spies and undercover representatives of Israel’s government.

The questions that arose in my mind were answered. Given that these agents slip into Argentina with the assumption that they will need to act outside that nation’s unfriendly rules of law, and are essentially going to kidnap Eichmann, I wondered why the fuss. If they were willing to go that far (not that they shouldn’t), why not just sail in under a black flag and cap him behind the ear? Why all the fuss and bother to smuggle him back to Israel to be tried?

And it became clear. Many other SS officers were dealt with in the manner I had been thinking of, but this man was so utterly symbolic of the Holocaust that the world had to see him tried, and Israel and her people had to lay out the facts, document them irrefutably, and wisely so, because half a century later would come the Holocaust deniers who would want to pretend the whole thing was a hoax, sham, or exaggeration, and the Nuremberg Trials make it much harder for anyone to do so.

A thing that gave me great pleasure was reading about the agents, including our nominally fictitious protagonist, Haim, who DID get out of Germany or other parts of Europe in time to avoid arrest, torture, and maybe death.

I was surprised, and surprised to be surprised, about the news that Israel had had to fight for its independence. As a history teacher, how is it that I did not know this? I think it’s simple. It was too recent to be in the curriculum, but since I had barely been born when it took place, I was too young to remember. And independence from Britain was important. On the surface, it looks as if they bit the hand that fed them; hey, they put up a Jewish homeland to help people escape Hitler, and now you’re going to shoot at them?

But it turns out this was very necessary. Part of Britain’s game plan was to limit how many could come out. They were more generous in their immigration policy than the USA, but that’s not saying much. Israel needed independence in order to have a nation where all Jews could safely exist. (I won’t even go into the Palestinian question which is worth many other books, a huge issue unto itself.)

Like a lot of academics, I have many Jewish friends, and though all are too young to have experienced the horror first hand, they have family stories, even legends. (“My grandmother personally rescued one of the last remaining Torahs from a burning synagogue”, a colleague told me.)

But even if I had not had their friendship, simple justice would have permitted me to sigh with satisfaction, once when Eichmann was in custody, and again when he was convicted.

Don’t just read this book; keep it. Share it with your children. The world must never, ever permit such a thing to happen again. It is by educating the next generation, and they the one after them, that we keep the neo-Nazis firmly on the fringes, which is the best place for them to enjoy the First Amendment rights they would gladly grind beneath their hobnailed boots for the rest of us if permitted to do so.