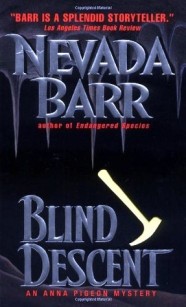 Of all of the riveting tales Barr has spun around her park ranger protagonist, Anna Pigeon, this is, I think, the most compelling (and I have read them all)! For those that want to know, it’s the sixth in a long series, each of which is set in a national park.

Have any issues with claustrophobia? If yours is intense, you may need to give this one a miss. It involves caving and spelunking, including oh my stars crawling in a tiny horizontal tunnel where five extra pounds put on over a last-minute cheesecake just could mean the end of you. Once you’ve gone miles and you can’t go forward, and your light is out…what are you supposed to do, go backwards? It’s not like it’s all one tunnel. There are places you can fall, wrong turns you can take. After all, it was not made to be entertainment, it’s a seriously bad-ass part of Mother Nature that I don’t care to think about too hard.

Now, imagine that you are on such an intense journey, and that you are Anna Pigeon (whose only really detrimental characteristic is a stereotypical view of large people…you know, lazy, poor character, untrustworthy…I said something on Barr’s website once and she responded that this is her character’s perspective, so if you are sensitive about snarky remarks regarding people who have any extra meat on their bones, beware the whole series). Okay, now with that digression aside, imagine you are Anna Pigeon, and because you are a buff, toned ranger with a good reason to do so, you have headed into one of these caving expeditions; you’re in a tight spot; and it is only there that you realize that someone on the expedition would prefer you not make it out again.

Barr’s bias against sizable people aside, her writing is otherwise so impeccably skillful that I have no choice but to give her all 5 stars. Don’t read it right before you go to sleep, unless you are COMPLETELY untroubled by things that go bump in the night!